The story of the Munich Air Disaster on 6 February 1958 is well known around the world, a tragedy that resulted in the deaths of 23 of the 44 people on board a flight from Belgrade to Manchester that had stopped in Germany for a scheduled refuelling.

That plane was carrying Manchester United, reigning back-to-back champions of England and one of the best in Europe in the early days of formal international club football.

Eight of the 17 players in the travelling squad died. Two more never played football again as a result of the injuries they sustained. It was a team more than cut in half in a cruel instant. Roger Byrne (above), Eddie Colman, Mark Jones, David Pegg, Tommy Taylor and Liam Whelan were killed instantly. So too was Geoff Bent, who had recently returned from injury and only travelled as extra cover. Duncan Edwards, the star of the team, died from his injuries 15 days later.

Edwards, Colman, Pegg and Whelan were all 22 or younger, but they were established stars. Edwards had already played close to 200 games for United since making his debut at 16, while he was becoming a star for England as well. Pegg was also capped, Colman was, by all accounts, expected to be called up soon, while Whelan was capped by Ireland.

Jones was 24, Taylor was 26, Bent was 25, and Byrne – the captain and among the oldest in the squad – was only 28. These were players who were already the best in English league, were becoming the best in Europe, and most were still well short of hitting their peak.

Johnny Berry suffered a fractured skull, broken jaw, broken elbow, broken pelvis and broken leg and never played again. Doctors at the Rechts der Isar hospital in Munich feared he wasn’t well enough to be told of the plight of his teammates, and it remains a story of great sorrow that during his recovery Berry complained about Taylor not visiting him, unaware his friend was dead. ​Three of United’s staff in Bert Whalley, Tom Curry and Walter Crickmer also died. Busby himself was badly injured in the crash and was twice read the last rites on what seemed as though would be his deathbed in that Munich hospital. Thankfully, he pulled through.

Legendary assistant coach Jimmy Murphy, the man who rebuilt the club in his boss’ absence, was not on the plane. He had stayed behind in order to fulfil his commitment as Wales manager in a World Cup qualifying playoff against Israel in Cardiff. How history and United’s recovery could have been so different had they lost Murphy in Munich as well.

Busby had won his first league title with United in 1951/52, but it was an old team featuring a number of players who had been with the club since football resumed after the Second World War, or in some cases, since even before the conflict.

By the late 1940s and early 1950s, United were starting to bear the fruits of the Manchester United Junior Athletic Club, created in 1937 so that the club, which had twice come close to going out of business in the first half of the 20th century, could develop its own talent.

It was unusual at that time for clubs to focus on youth when first-team professionals were typically much older, but Busby bought into the philosophy when he arrived at United after the war and by the mid-1950s had create the great side that became known as the ‘Busby Babes’.

A new look United side recaptured the league title in 1955/56, with Edwards, Pegg and Dennis Viollet, who was 22, all playing more than 30 games. Colman played 25, despite being just 19 when the season began. Byrne missed only three, while Jones, also 22, was an ever-present.

That pattern became more pronounced the following season in 1956/57 when United retained the title and there was more game time for Whelan and the emergence of Bobby Charlton. The Busby Babes were not just good, they were head and shoulders above the rest of the clubs in England. United won the league by 11 points in 1956, the equivalent of 16 today when wins are worth more. In 1957, it was an eight-point margin of victory, which would have been 14 today. In both, they won at least five games more than their nearest challenger.

The Babes were also flying the flag for English football in Europe as well.

When the European Cup was created in 1955, Chelsea were invited to compete as champions of England, only to be ‘advised’ against entering by the Football League. They duly fell in line under pressure from Football League chairman Alan Hardaker.

Brian Glanville of The Times once described Hardaker as an ‘unbending autocrat’, a man whose ‘attitude was supremely negative and self-aggrandising, probably influenced by the fear that his own competition would be overshadowed by the new one.’

United met similar resistance from Hardaker the following season, but Busby was insistent that his team should enter the European sphere and pushed ahead anyway. 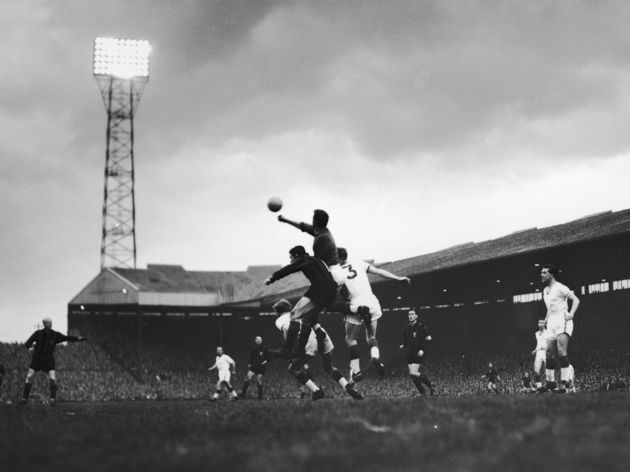 Immediately, the young team reached the semi-finals in their first foray into international contests. In their first ever European ‘home’ game, which was actually played across Manchester at Maine Road because Old Trafford did not have floodlight, they beat Anderlecht 10-0 – that remains the club’s all-time record win to this day.

Victories against Borussia Dortmund and Athletic Bilbao, champions of Germany and Spain respectively, followed and it wasn’t until the semi-finals that United succumbed 5-3 on aggregate to holders Real Madrid, who claimed a second title.

Of the quarter-final clash against Bilbao, Charlton recalled in his 2007 autobiography, “Matt Busby had declared that [European football] was the future of the game and here, in this match, was the hardest evidence that he was right.

“United versus Bilbao had produced the best of football, some brilliant skill and a razor edge of competition. Charges that United had got above themselves were promptly withdrawn.”

A year later, United returned to the European Cup semi-finals. The trip to Belgrade, which ended in such tragedy halfway home, had seen the team draw 3-3 against Red Star Belgrade in the last eight, holding onto a first leg aggregate lead and progressing to the last four for a second time.

The semi-final against AC Milan wasn’t played until May, around a month after the other tie between Real Madrid and Vasas. Reeling from the disaster at Munich, United had resumed domestic action within a couple of weeks, playing with a vastly different side. Remarkably, they won the first leg 2-1 at Old Trafford, but crumbled to a 4-0 scoreline in the return.

Dominant at home and seemingly on the cusp of something even more special abroad until disaster struck. And, so goes the final verse of Flowers of Manchester:

Its proud successes mocked by a cruel turn of fate.