Player recruitment at Anfield is such a distant consideration at present that even a 25-point lead at the top of the Premier League is not enough to take any eyes off the ball.

There is a league title, a Champions League and an FA Cup left to win; 12 potentially history-making weeks that could write this team into the hall of fame as one of the greatest ever.

But while not a soul at Melwood, save for those paid explicitly to do so, is giving half a thought to who may be coming or going from 1 June, those of us who have a little more separation can see the inescapable truth that there is work to be done this summer, regardless of how unfathomably good this group of players has been.

FT: Norwich 0 #LFC 1: Sadio Mane fires Klopp’s men 25 points clear at the top of the Premier League. Scrappy contest but the party in the away end is in full swing. Liverpool equal a club record with 17 successive league wins. Next stop Madrid. 

Half the football world is in rebuild mode and while it’s not quite that drastic in the Reds’ case, there will almost certainly be an Adam Lallana-shaped void to fill. Xherdan Shaqiri looks similarly nailed on to leave, while Nathaniel Clyne is a write-off, and there is a growing likelihood that Dejan Lovren will join them on the list of outgoings.

Resetting would be foolish and unnecessary, but it seems like a minor refresh, even while the current team is operating like an exceptionally well-oiled machine, is on the horizon.

The room freed up on the wage bill, at least, justifies the recruitment of some natural cover at left-back. An injection of youth to aid the long-term progression of an ageing midfield (​Weston McKennie? Yes please), meanwhile, would be welcome. Most interesting, however, are the reports linking the Reds with another forward; namely Jadon Sancho or Timo Werner.

Both forwards have set the Bundesliga ablaze this season, and between them have racked up 78 goal involvements in all competitions, split almost down the middle. But while they each carry a menace and pedigree making them mouthwatering prospective additions to the Anfield attacking ranks, with the rumours comes a dilemma; who would they replace?

After all, surely each of Roberto Firmino, Sadio Mané and Mohamed Salah have iron-forged starting spots, while neither the prolific Sancho nor Werner would settle for a ‘Divock Origi’ role within the squad.

Just a reminder that Timo Werner (26) has the most G/As in the Bundesliga this season. More than Robert Lewandoski (25) and Jadon Sancho (25).

Following that logic, then, one of the current established front three would have to be moved on to accommodate. And if that is the reality, then any ​Liverpool fan with their wits about them would surely rather stick than twist.

But is football really that simple?

The recruitment team will have two major remits this summer; first and foremost to continue building for the years ahead. And while it seems unfathomable now given the form each of the trio are in, there will come a time in the not-too-distant future when Firmino, Mané and Salah are unable to play at the top of their game week-in, week-out.

We’re already seeing very early signs of that; Firmino has lasted 90 minutes in only half of the Reds’ league games so far, while Mané’s spell on the sidelines with injury has necessitated the deployment of Alex Oxlade-Chamberlain on the left flank. 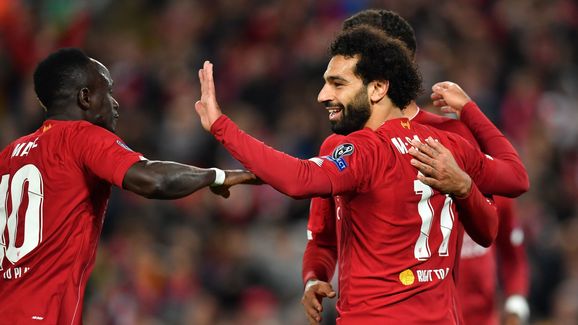 They are fearsome and formidable but the time will come when the established triumvirate are no longer the absolute status quo. And while Takumi Minamino and Divock Origi will be licking their lips at that prospect, the brutal reality is that although both have long-term roles to play, neither have the ability within them to become a genuine challenger to a podium place.

So that’s one box ticked; what about the second remit? That is simply to improve the current squad. And while that’s easier to say than do for anyone, for a club that boasts the most efficient and finely-balanced squad in the world at present, it’s a near-impossibility.

If Liverpool are taking both of those remits seriously, then why wouldn’t they be looking at two of the most exciting attacking talents in Germany? At 19 and 23 respectively, they would each serve the club far beyond the current era, while their unquestioned ability offers a massive step up on the current options outside of the holy trinity.

Of course there are considerations beyond our scope that could either make or break any potential deal. Attitude and personality are just as pivotal to Klopp as on-field contributions, while they would have to take nothing for granted with regards to first-team football, and welcome the chance to try to move the immovable. None of that, of course, is guaranteed, and it may be that neither player ultimately suit.

In truth, it’s Werner who looks more likely with all that in mind. His release clause means he would come in at around half the price of Sancho (​still a hefty £51m, granted) while he seems the more likely of the two to arrive with his feet on the ground and, if necessary, bide his time.

In any case, however, a deal for either, while holding onto the current front three, could make a lot more sense than it seems. There isn’t much available that could improve upon this Liverpool side, but a genuinely world class fourth option to keep the status quo on their toes while simultaneously offering some trusted, like-for-like relief, would do just that.

Liverpool are very interested in Timo Werner. LFC sees him as a perfect complement to attackers who are currently in the club. Timo himself is open to a new challange (SportBild via @tom_ur) pic.twitter.com/HJRcFLUZ2P

It’s a signing that will have to be made in the long-run regardless, and given how incisively proactive the Reds have been in the transfer market of late, don’t be surprised if it comes before the 2020/21 season kicks off.