Liverpool are one of the greatest clubs to have graced the footballing world, with hundreds of world class players jogging out of Anfield’s famous tunnel in red over the years.

While they may currently be strolling to a maiden Premier League title, players other than Mohamed Salah, Sadio Mane and Virgil van Dijk have written themselves down in Merseyside folklore over the years.

No doubt whittling it down to just ten names is a very difficult feat, but without further ado here are the ten greatest footballers in the history of Liverpool Football Club… Fowler is one of the most instinctive poachers to have donned a Liverpool shirt. Earning the nickname ‘God’ from the Anfield faithful, Fowler netted 183 goals in 369 appearances for the Reds and is currently the seventh highest scorer in ​Premier League history.

Between 1994 and 1997, Fowler was one of the greatest strikers in world football as he netted over 30 goals in all competitions for three successive seasons. No surprise, then, that he won the PFA Young Player of the Year in both 1995 and 1996. Suarez is one of the best attackers to have graced the Premier League in the modern era. Signing in 2011 from Ajax, the news of Fernando Torres’ departure overshadowed his arrival, but Suarez ended up being more prolific than the Spaniard ever was.

Suarez enjoyed the most successful period of his ​Liverpool career during his last season at Anfield, finishing the 2013/14 term as the joint-top scorer in Europe’s top five leagues alongside Cristiano Ronaldo with 31.

The Uruguayan became Liverpool’s first to surpass 30 goals in a season since Ian Rush in 1986/87. Between 1970 and 1981, ‘The Networker’ missed just six league matches and was consistently a phenomenal performer as the Reds enjoyed their most successful decade in their history. The Englishman only conceded 16 goals in the 1978/79 season on his way to his fourth league title. As an absolute unit of a defender and a former member of the British Army, Yeats was a force to be reckoned with. Unveiled famously by Bill Shankly as his ‘giant centre half’ in 1961, Yeats would go on to become one of Liverpool’s finest ever defenders.

The Scotsman spent a decade at Anfield, captaining the Reds to three major trophies in the mid 1960s The Jamaican-born Barnes was the star of possibly Liverpool’s most exciting ever forward trio. Alongside Peter Beardsley and John Aldridge, he shone at the height of the Reds’ glory days, as his side won two league championships and an FA Cup in a three year period.

Winning the FWA Player of the Year two years out of three at the end of the 1980s, Barnes was recognised as one of the best forwards in England’s top flight. Netting on 108 occasions for Liverpool, including 24 within the final 15 minutes of games, he was an expert entertainer. Starring in the centre of the Reds’ 1980s defence,

Hansen was instantly a hit at Anfield as he won the man of the match award on his debut against Derby County; his first appearance of an eventual 620. He remains Liverpool’s tenth most capped player ever, winning a remarkable eight championships in 13 seasons. Known for being one of the ultimate midfield maestros of his generation, Souness is a man certain to be in everyone’s all-time Liverpool XI.

Souness won five out of an available six First Division titles with Liverpool between 1978 and 1984 – including three back-to-back – and also won the European Cup on three occasions during the same period. He went on to manage the Reds between 1991 and 1994, winning the FA Cup. Rush is, simply, the greatest goalscorer in Liverpool’s history. He netted 346 times in 660 appearances, and in the 1983/84 season famously put four past Coventry City and five past Luton Town.

Merseyside rivals Everton absolutely despised playing against Rush. The Welshman scored a ridiculous 25 goals against the Toffees – ten more than he managed against any other opponent. The definition of a bogey man. 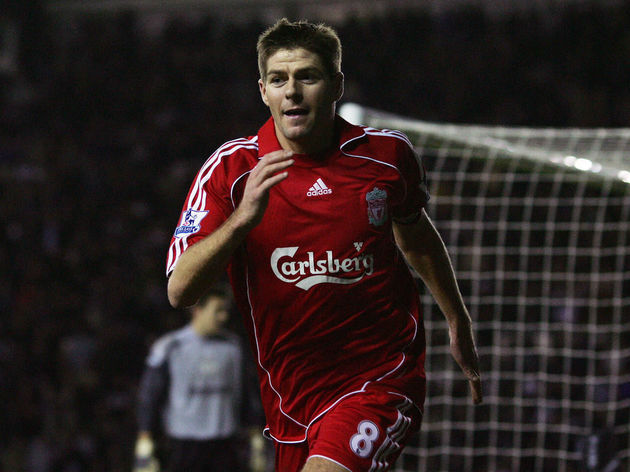 Gerrard is arguably Liverpool’s greatest captain, certainly their best ever midfielder and probably the most successful footballer to never win a league title. The ​Premier League aside, ‘Stevie G’ achieved nearly every other accolade achievable. So many trophies.

He was an almighty leader, strong in the tackle, could hit the ball at ferocious speed, had tremendous vision, scored outrageous goals, and pulled off brilliant passes for fun. There was very little that Gerrard couldn’t do. He even netted for Liverpool on that famous night in Istanbul. Dalglish is Liverpool’s greatest ever footballer and up there with the very best to grace the beautiful game. Even legendary pair Bill Shankly and Bob Paisley deemed him ‘King Kenny’ as ‘the whole team was illuminated’ every time he took to the field at Anfield.

Dalglish signed from Celtic in 1977 for a British transfer record fee of £440,000, and it’s safe to say he was worth every penny. Making 515 appearances for the club and scoring 172 goals, he was the key man as Liverpool won 15 major trophies in eight years between 1978 and 1986.