The hosts started brightly, dominating possession early on, and it took them just 15 minutes to move into the lead – Sancho on hand to finish off an excellent attacking move. Vincenzo Grifo had a wonderful opportunity to equalise for Freiburg midway through the first half, but he fired over when put through on goal.

The away side continued to grow into the contest as the first half progressed, but Dortmund twice came close through Julian Brandt and Thorgan Hazard. Early in the second half, BVB’s Sancho worked a yard of space after some lovely link-up play with Hazard before curling a shot just wide.

Brandt was the next player to fire inches wide, but Dortmund were almost pegged back as L BVB pushed for a second to give themselves breathing room, but this did leave them exposed at the back and they were nearly caught out on a number of occasions.

Jadon Sancho really is a supreme talent, isn’t he?

The 19-year-old scored the only goal of the game, his 14th league goal of the season. With Erling Haaland starting on the bench, Sancho stepped up and not only did he continue to pose a real threat in front of goal throughout the game, he also showed the intelligence and awareness to drop deeper and create opportunities for his teammates. 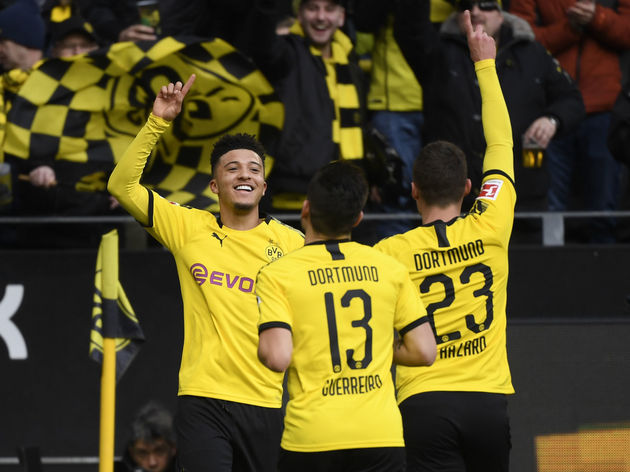 He was constantly looking to pick up pockets of space to work in, making him a constant threat as defenders were unsure how to deal with him. The former Manchester City man’s ability to know where each player is on the pitch is sensational, producing the deftest of flicks to link up with his fellow forwards.

Another goal for Sancho and another standout performance.

Dortmund score and who else would it be! Yep, Jadon Sancho puts #BVB ahead, his fourteenth goal of the season to go along with his fourteen assists! #BVBSCF #Bundesliga

Dortmund next travel to take on